Culture, pride, and a fighting spirit have always guided Jade. Her family stressed these values to her growing up, especially her grandmother, who became Jade’s biggest fan early on, offering her encouragement in all her endeavors. As a young woman, Jade participated in several forms of athletics that utilized her unique blend of speed and flexibility. Entering WOW satisfied Jade’s need for athletic competition as well as the spirit of her family’s rich heritage. Initially, Jade experienced great success within WOW as a fan-favorite. However, none of that success translated into the ‘win’ column. After the passing of Jade’s grandmother, Jade took an office job as a talent scout for WOW, working directly with WOW executives, Jeanie Buss and David McLane, to discover the next generation of WOW Superheroes. After some time in her new position, Jade’s mother presented Jade with a letter Jade’s grandmother had written before she passed away. With that letter came the Jade necklace for which she was named. The emotional, heartfelt letter convinced Jade to return to the ring and become a Superhero once again.

Jade is a technical wrestler with speed and aerial abilities.

The Art of War, Cantonese Crush

People who are late, slackers

Jade’s father is famed musical conductor. Jade is one of the most sought after Pilates instructors in all of California.

Get to Know Jade 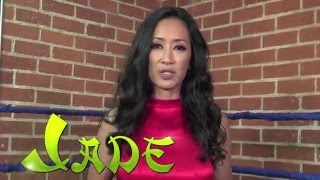 Get to Know Jade