The Baroness of Bardstown

Jessie Jones grew up in the Southern town of Bardstown, Kentucky--the bourbon capital of the world. However, Bardstown was in the shadow of “that yankee city” of Louisville. Jessie was often teased by kids from Louisville for being from Bardstown. The teasing usually led to fighting. The fighting didn’t end in the schoolyard and it didn’t end well for her attackers. As she grew older and more confident, Jessie would go down to the bars on 4th Street to pick fights with anyone and everyone. Finally, Jessie was sent to live with her family down in Georgia. Part of that family included the legendary Selina Majors. In Georgia, Jessie got to see the best wrestling in her own backyard. She would sit in awe as she heard stories about Selina’s career and the stories of Georgia Championship Wrestling. Selina decided to teach Jessie how to wrestle and put that destructive, fighting energy to good use. On the independent circuit, Jessie worked everywhere as she earned her reputation. Now, Selina has brought her family with her to WOW, and these two aim to demonstrate what Southern Pride truly represents.

Jessie Jones is a technical wrestler who cheats from time-to-time.

“Bring everything you got, because it ain’t gonna make a lick of difference.” , “I’m gonna show you what a real wrestler looks like!”

Jessie fishes in the rivers of Kentucky. She skins her own fish and eats them.

GET TO KNOW JESSIE JONES 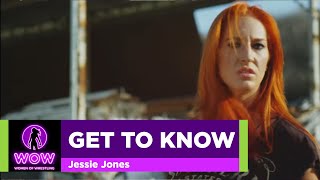 GET TO KNOW JESSIE JONES

by WOW Superheroes
Get to Know Jessie Jones

Get to Know Jessie Jones