There must be a sacrifice! Siren the Voodoo Doll hails from the French Quarter where the practice of voodoo is commonplace. Blood rituals and dark relics laid the foundation upon which Siren’s career has stood. She attributes her success to her affiliation with the dark spiritualism that voodoo provides. She has control over her opponents in and out of the ring. Out of the ring, she utilizes the mysticism of the spirit realm to get an edge in the game of life. In the ring, she uses her strength and cunning to gain an edge over the opposition. Her presence itself serves as a mind game to those that dare to step in the ring with Siren. Then, when Siren demonstrates her unique and unorthodox ability in the ring, all challengers remain rattled. Suplexes and shrunken heads. Tapouts and tarot cards. Siren the Voodoo Doll has been able to fuse the surreal qualities of voodoo with a smash-mouth repertoire of incredible maneuvers in the ring. Some may look down upon Siren’s religious views. Some may doubt she has the power of the darkness. Those that laugh in her face will soon be silenced by the Siren’s song as the Voodoo Doll toys with them. All must make sacrifices, and it appears that the WOW Superheroes will be Siren’s offering to the dark from which she has emerged.

The Depths of the Bayou

Siren uses her strength and cunning to her advantage in the ring.

GET TO KNOW SIREN THE VOODOO DOLL 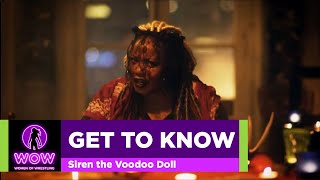 GET TO KNOW SIREN THE VOODOO DOLL