WHO HAS A DEATH WISH?

Like any young, rebellious teen, The Dagger was fascinated with sharp objects. Raised in the Bay Area of Northern California, Dagger would sneak out at night for daredevil exploits with her friends. Sensing a mutual interest, her father introduced her to his weapons collection, and the two formed a strong bond. She went on to build a collection of her own knives, which she calls her “babies” They are just collector’s items of course! Unfortunately, Dagger’s happiness would not last. Though she went on to start a family of her own, the mysterious death of her abusive husband cast a shadow over her life, and gained Dagger unwanted notoriety, with some suggesting her husband died under suspicious circumstances.However, Dagger’s lawyer, Sophia Lopez, successfully defended her innocence, pointing out that although she has a short fuse, she could not possibly have murdered her own husband!With years of MMA training under her belt and at the recommendation of her legal counsel, Dagger has joined WOW as a way to rebuild her public image and as an outlet for all that…anger. Attorney Sophia Lopez also introduced The Dagger to The Temptress, another woman treated unfairly by an unfair system. The two birds of a feather flocked together to form the Vengeful Vixens tag team, and the other WOW Superheroes better watch out: because The Dagger will do anything to get what she wants.

Knife In The Back, Lung Blower, The Kiss Off 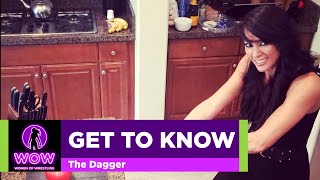