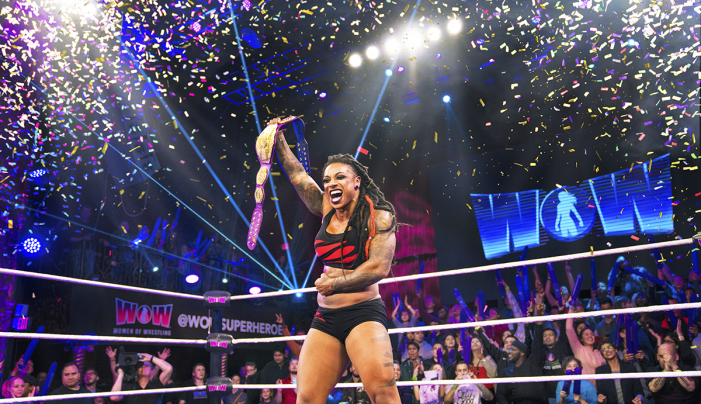 THE BEAST VS. TESSA BLANCHARD

Every sport has witnessed great rivalries: Larry Bird and Magic Johnson, Tom Brady and Peyton Manning, Mark McGwire and Sammy Sosa. Viewers of WOW felt a new, epic rivalry brewing in recent weeks. The tension between The Beast and WOW World Champion, Tessa Blanchard, has been thick enough to cut with a knife. This whirlwind of competition has drawn in many casualties, but the body count only stands to increase if The Beast continues to be denied what she feels belongs to her, and that is a shot at the WOW World Championship.

Entering this season of WOW – Women Of Wrestling, two competitors made it clear their intention to unseat The Born Legend, Tessa Blanchard, as the preeminent title holder: The Beast and Jungle Grrrl. Jungle Grrrl went to great lengths in an attempt to become the first person to ever hold the World Championship twice. She feigned a short-lived partnership with The Beast and drew the ire of one of WOW’s most ferocious combatants. Jungle Grrrl received a chance at Tessa and the WOW Title, but she fell just short of becoming a two-time champion.

While dealing with former champion, Jungle Grrrl, Tessa Blanchard created literal and metaphorical roadblocks to prevent The Beast from stepping into the ring with the Born Legend. Tessa partnered with the self-proclaimed World’s Greatest Attorney, Sophia Lopez, to draw up legal document after legal document allowing Tessa to select her own challengers to the World Title. While Tessa was fighting some of the most-seasoned athletes from all across the world, she found opportunity after opportunity to capitalize and seize victory. Her abilities proved to be that of a champion, but her actions dodging The Beast said otherwise.

The Beast grew more and more frustrated with everything mounting against her. She began to feel she would never be able to legally out-maneuver Sophia Lopez and get the championship match that rightfully belonged to her. The Beast’s aggression only intensified with every moment she was denied a match with the champion. The tension boiled over into a wild locker-room brawl with Jungle Grrrl. It became evident that The Beast was willing to take her anger out on anyone and eliminate any obstacle. The Beast demonstrated to the world that she would injure, maim, and incapacitate every member of the WOW roster in order to get the match with Tessa Blanchard for the most coveted prize in all of women’s wrestling.

Finally, Tessa could not avoid her number one contender any longer, and the match was set for the season finale of WOW – Women Of Wrestling. It seemed Tessa’s various challengers en route to The Beast sharpened every weapon in her arsenal, because she brought a fight to The Beast, the likes of which has never been witnessed. Tessa Blanchard fought like a warrior with a sword finely sharpened by a blacksmith. The Beast, however, battled like the juggernaut she has proven to be time and time again. Her raw strength and unbridled power proved to be the end for Tessa Blanchard’s illustrious reign as champion. For with the slam of The Beast’s patented Powerbomb, she held Tessa’ shoulders down for the count of three and could, at last, hoist the WOW World Championship belt above her head proudly as she left the Belasco Theater in downtown Los Angeles, California, as the undisputed World Champion.