As a child, Jungle Grrrl and her parents moved around the world. They settled for a time in Colombia, on the edge of the Amazon Rainforest. Being surrounded by the Amazon’s vibrant yet cruel ecosystem taught the young girl the Law of the Jungle: “Kill or be killed.” As an adult, Jungle Grrrl took the lessons she learned in the Amazon and translated them into the ring, becoming one of the fiercest competitors in WOW - Women Of Wrestling history As a WOW Superhero, Jungle Grrrl accumulated an impressive winning streak unlike any other competitor. She won the World Championship in 2013 in Las Vegas, Nevada. Outside of the ring, she became a wife, a mother, and a businesswoman. She even became a best-selling author. Maturing changed Jungle Grrrl’s mindset. She no longer fought for wins, she began fighting for something more important. As if Jungle Grrrl wasn’t already the most feared Superhero in WOW, she now fights for much, much more. She’s fighting for her family, her cub, and her dynasty, which makes her all the more dangerous.  And after losing the Championship to Santana Garrett (without being pinned), she must now physically master the hunt once again.

The edge of the Colombian Rainforest

Jungle Grrrl is a power wrestler with speed, agility, and aerial abilities.

Her beloved family, working out in her gym

Excuses for not achieving peak performance

“Never hunt what you can’t kill.”, “Kill or be killed”, “Learn the laws of the jungle.”

Created the word “Endorphasm,” which she defines as “the point when we push ourselves past the point of physical exertion and the endorphins take us over and transform us into a Superhero.”

GET TO KNOW JUNGLE GRRRL 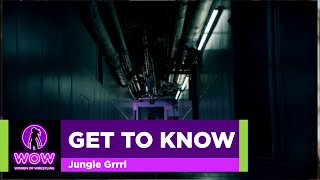 GET TO KNOW JUNGLE GRRRL

by WOW Superheroes
Get to Know Jungle Grrrl

Get to Know Jungle Grrrl